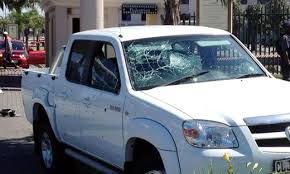 The case against 12 men accused of attempting to rob Emperors Palace casino was postponed in the Kempton Park Magistrate's Court on Monday, the NPA said.

"The case was postponed to May 10 so that accused number 10 can secure legal representation, and for accused 11 and 12 to be released from hospital," said National Prosecuting Authority spokesman Medupe Simasuku.
Fifteen men were initially arrested for the foiled robbery at the casino last Sunday. Three were later released. At the time police spokesman Lt-Col Lungelo Dlamini said police found the three were not part of the gang.
Two men were recovering in Tembisa Hospital after police shot and wounded them.
Police were tipped off that a gang was planning to rob the gambling spot. They confronted the men at the casino's entrance and a shoot-out ensued.
Three AK-47 assault rifles, four pistols, and one revolver were seized. A five-year-old girl was grazed by a stray bullet inside the casino's hotel.
The 12 face charges of conspiracy to commit robbery, attempted murder, possession of unlicensed firearms, and possession of suspected stolen vehicles.
They will remain in custody.

Roads around Emperors Palace, Johannesburg, have been closed off following an armed robbery on Sunday morning.
28 April 2013 | SAPA AND CITIZEN REPORTER

Further details were not immediately available, Gauteng police spokesman Lt-Col Lungelo Dlamini said.
SABC news said that two suspected robbers were killed during a shootout and several others arrested.
Eyewitness News reported that witnesses described hearing gunfire and seeing numerous police vehicles at the casino following the robbery.
One woman, who was opposite Emperors Palace with her boyfriend, described what she heard.
“At about 7am we heard machine guns then it was quiet for about 20 minutes and then we heard helicopters circling the area.”
Tom Jones Road and the surrounding area around Emperors Palace has been cordoned off.

Media Statement regarding the attempted robbery at Emperors Palace

29 April 2013
Emperors Palace confirms the incident of an attempted armed robbery outside the Emperors Palace casino resort on Sunday morning.
According to the official SAPS statement  “At 07h00 on 28 April 2013 a shoot out occurred outside the entrance of Emperors Palace in Kempton Park between armed robbers and the South African Police Services (SAPS). The SAPS were reacting to a tip off following crime intelligence.  Police have arrested 14 suspects and confiscated nine firearms. Two of the alleged robbers were injured during the incident and a five-year-old girl has been hospitalised after being hit by shrapnel. She is in stable condition.”
“Two of the alleged suspects have been taken to hospital and are in a stable condition. No police officials were injured in the incident.”
“Our primary concern is for the safety and well being of our patrons and we are praying for the speedy recovery for the little girl whilst extending our ongoing support and sympathy to her family.” says Julie van Wyk, spokesperson for Peermont Public Relations Manager.
“We would like to commend the SAPS and the Emperors Palace security and surveillance division for a speedy reaction to the incident. The safety and security of both customers and staff will always remain a priority in our lives.”
For more information please contact:
Brigadier Neville Malila, 082 411 4030
EMPERORS PALACE PRESS ROOM

We are very anxious to know who these robbers are 'connected' to.
Is it a 'third force' or an unknown syndicate of crime?