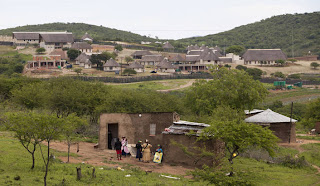 If you were hoping the Department of Public Works task team on the upgrades to President Zuma’s Nkandla residence would shed some light on who’s responsible for the R206 million spend, don’t hold your breath. The president’s house is a national key point so his allies can “justifiably” say releasing the juicy details of the report might compromise national security. By GREG NICOLSON.

THIS IS NOT A NATIONAL KEY POINT - JUST ANOTHER PERSONAL COVER UP!

LIKE THE AL-QAEDA TERRORIST CAMP ARTICLE WHICH IS NOW UNDER THE RADAR!

LET'S HOPE THEY ARE NOT LINKED TO THE GUPTAS?