The New Age to South Africa: Please act like the serfs you are 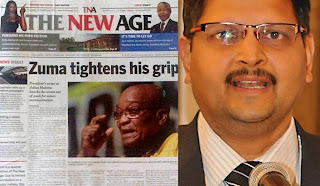 In Tuesday’s editorial, the otherwise silent The New Age newspaper says the Gupta wedding controversy proves that South Africans are racist, xenophobic savages determined to bring down the new world order. RICHARD POPLAK wonders if it isn’t time for us to learn how to be mensches.

The Guspta's have bought a corrupt president of a babana republic.

The Gupta's should be decalared "Undesirable ALIENS and deported to India.

If Zuma, so desires, he can go with them!!

This has been a transgression of our Constitution and all our internal security laws.

If Zuma's office did not protect him, he, should be charged for HIGH TEASON!