Zuma and the 'very very important' to get new airplanes


The defence force is looking to buy new presidential jets and planes as soon as possible, the Saturday Star has reported. 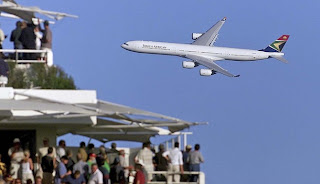 The Government is looking into buying a fleet of new planes for the president and VVIP friends........

Defence Minister Nosiviwe Mapisa-Nqakula told the Cape Town Press Club on Friday the department was spending millions each week on chartering aircraft because many of the current planes were so old.
According to the report the department was looking into buying VVIP (very very important people) jets as well as strategic airlifting capacity planes as soon as possible.
"We're running out of time," Mapisa-Nqakula said.
She said the Treasury had allocated money to buy the new planes.
These new aircraft would charter VVIP's including President Jacob Zuma, the deputy president, former presidents and the minister and deputy minister of defence, the Saturday Star reported.
"Every week we pay millions of rand chartering aircraft for strategic airlift capability, which far exceeds the money we would have spent by purchasing," Mapisa-Nqakula said.
"If you look at some of our aircraft, they're 60 to 62-years-old and should be museum pieces. I won't elaborate on some of the experiences I've had… but this process [to buy aircraft] must begin."
In 2009 Deputy President Kgalema Motlanthe had to make an emergency landing in the Democratic Republic of the Congo after problems with his jet and in 2011 the aircraft he was due to travel in had problems before take-off from Waterkloof Air Force Base in Pretoria.
Last year Mapisa-Nqakula cancelled plans to buy a R2-billion presidential jet. – Sapa

Are these new planes going to be Russian?

The extension of the ANC ARMS DEAL SCANDAL?

ZUMA SEEMS TO BE MAKING HIMSELF COMFY FOR THE FUTURE OF ZUMA AIR!

The untouchable dictator in the making?

Time will reveal his destiny!
Posted by Sonny Cox at 10:32 AM