Counterterrorism police have questioned Abu Nusaybah, a friend of one of two suspects in the killing of a British soldier, after a BBC interview. 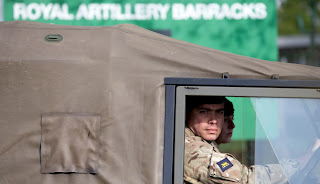 Police on Saturday questioned a friend of Michael Adebolajo, one of two suspects in the killing of an unarmed British soldier, a savage attack that has horrified Britain.
The friend, Abu Nusaybah, was arrested immediately after he gave a BBC television interview describing how Adebolajo may have become radicalised and alleging that Britain's security services tried to recruit him. Police said Nusaybah was wanted on suspicion of involvement in unspecified acts of terrorism.
Nusaybah said Adebolajo became withdrawn after returning last year from a visit to Kenya, where he claimed he had been arrested and then abused both physically and sexually while in jail. Nusaybah claimed that Britain's domestic spy agency, MI5, approached Adebolajo to recruit him upon his return to Britain about six months ago.
Adebolajo (28) and Michael Adebowale (22) are suspected of killing soldier Lee Rigby by hacking his body with knives and a meat cleaver in front of dozens of passersby on Wednesday in the south-east London district of Woolwich. The horrific scene was recorded on witnesses' cellphones, with one of the two suspects making political statements and warning of more violence as the soldier lay on the ground.
Police shot both men as they arrived minutes after Rigby's slaying. Both suspects remain under armed guard at two London hospitals.
Abuse at the hands of Kenyan forces
Questions abound over what could have led the two men to attack Rigby, a 25-year-old ceremonial military drummer and machine-gunner who had served in Afghanistan and was off duty when he was walking near his barracks. Nusaybah's interview offered one possible narrative. He said Adebolajo's behavior changed after he allegedly suffered abuse at the hands of Kenyan security forces.
"Although that change wasn't necessarily one that became overt, aggressive or anything like that, he became ... less talkative. He wasn't his bubbly self," Nusaybah told the BBC.
He said MI5 agents approached Adebolajo after he returned to Britain and initially asked him if he had met specific Muslim militants, then asked Adebolajo if he was willing to act as an informer.
"He was explicit in that he refused to work for them," Nusaybah said.
The BBC said police arrested Nusaybah outside its studios on Friday night immediately after recording the interview.
Potential terror suspects
"This interviewee had important background information that sheds light on this horrific event," the BBC said in a statement. "And when we asked him to appear and interviewed him, we were not aware he was wanted for questioning by the police."
London police confirmed that a 31-year-old man was arrested on Friday night on suspicion of "the commission, preparation or instigation of acts of terrorism". Police declined to identify Nusaybah by name or provide further detail.
It was not immediately possible to verify the information provided by Nusaybah, who said he had known Adebolajo for about a decade. MI5 does not publicly discuss its efforts to recruit informers.
It is not uncommon, however, for special services officers to occasionally visit communities to ask people if they know potential terror suspects or others under MI5 surveillance.
Potential informants go through a screening process to determine if they should be trusted, what their motivation might be and whether their information would be likely to be accurate.
Nusaybah said Adebolajo was converted to Islam around 2004. His account corroborates those provided by two Muslim hard-liners who said they also knew Adebolajo.
Brush with death
Anjem Choudary, a former leader of a banned British radical group called al-Muhajiroun, said Adebolajo was a Christian who converted to Islam around 2003. Choudary told the Associated Press (AP) that Adebolajo participated in several of the group's London demonstrations before Britain outlawed the group in 2010.
Omar Bakri Muhammad, another former al-Muhajiroun leader and radical Muslim preacher, said Adebolajo attended his London lectures in the early 2000s. Muhammad fled London and resettled in Lebanon in 2005 after suicide attacks on London's public transit system killed 56 people, including four bombers.
Police have not officially named the two suspects. The AP has received confirmation of their identities from British officials speaking on condition of anonymity because they are not authorised to disclose the information.
Few details have emerged about Adebowale besides one reported brush with death as a teenager.
The Guardian reported Saturday that Adebowale was stabbed in 2008, when a man attacked him and two friends in a London apartment. One 18-year-old friend died and the attacker received a life sentence for murder, the newspaper said.
MI5 director general Andrew Parker is expected to deliver a preliminary report next week to Parliament's intelligence and security committee detailing what the agency knew about both suspects and whether MI5 could have done anything to stop the attack.
The directors of Britain's foreign spy agency, MI6, and Britain's eavesdropping agency, Government Communications Headquarters, also are expected to give reports on what intelligence they had on the two men. – Sapa-AP

British police arrested a man under anti-terrorism laws at BBC headquarters after an interviewee said security services tried to recruit one of the two men arrested after a soldier was hacked to death in a London.in

Michael Adebolajo, 28 and Michael Adebowale, 22, are under armed guard in hospital after being shot and arrested by police on suspicion of the murder of 25-year-old Lee Rigby, a veteran of the Afghan war, on Wednesday.
A man identified by the BBC as Abu Nusaybah told its flagship news programme "Newsnight" that intelligence officers had approached Adebolajo six months ago to see if he would work for them as an informant. He said Adebolajo had refused.
BBC reporter Richard Watson, who conducted the interview, said police were waiting to arrest Nusaybah after the interview had finished on Friday. The pre-recorded interview was broadcast later that evening.
London's Metropolitan Police said counter-terrorism officers had arrested a 31-year-old man at 2030 GMT on "suspicion of the commission, preparation or instigation of acts of terrorism".
A police spokesman said the arrest was made at the BBC building, but did not confirm the man's identity. He also said the arrest was not directly linked to the soldier's murder. He would not comment on the BBC interview.
A source close to the investigation told Reuters earlier this week that both men suspected to have attacked the soldier were known to Britain's MI5 internal security service. However, intelligence officers thought neither man posed a serious threat.
Parliamentary inquiry
Prime Minister David Cameron has said a parliamentary committee will investigate the security services' role.
In his BBC interview, Nusaybah alleged that intelligence officers visited Adebolajo's London home after the suspect made a trip to Kenya last year.
Nusaybah said his friend had been arrested and questioned in Kenya. This assertion was dismissed by the Kenyan government as a "fairy tale".
"He mentioned initially they (MI5) wanted to ask him if he knew certain individuals," Nusaybah told the BBC. "But after him saying that he didn't know these individuals, what he said was they asked him if he would be interested in working for them. He refused to work for them."
Asked about Nusaybah's comments, a Home Office (interior ministry) spokesman said it never commented on security matters.
A Kenyan government spokesman said it had no record of Adebolajo ever visiting the east African country.
"We have never arrested him and we have never interrogated him, because if we had arrested him, we would never have let him go because of our experience of international terrorism," the spokesman said.
"Our conclusion is that this man is an imposter and a charlatan and wants to tarnish our the image of our country."
Three days after the soldier's killing, police have yet to bring any charges. Police said Adebolajo and Adebowale are in a stable condition in hospital. The pair were in "no fit state" to be questioned by police, a government source was quoted as saying in the Times newspaper.
Witnesses said two men used a car to run down Rigby outside Woolwich Barracks in southeast London and then attacked him with a meat cleaver and knives, before being shot by police.
The pair told bystanders they were acting in revenge for British wars in Muslim countries.

The British ignore the descendants of their own, yet, they let other 'Foreigners' into ENGLAND.

The Foreigners are biting the hands that feed them.