At least 35 arrests in Mali over French journalist murders

At least 35 arrests in Mali over French journalist murders 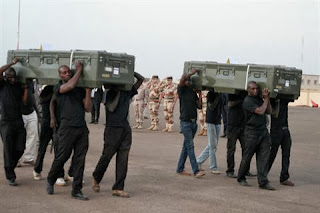 French soldiers salute as the coffins of two French journalists executed Saturday in northern Mali are carried during a ceremony in their honor at the military airport in Bamako, Mali, Monday, Nov. 4, 2013.(AP Photo/Harouna Traore)


BAMAKO: At least 35 suspects have been arrested in 48 hours as the hunt intensifies for the killers of two French journalists shot dead in Mali's rebel-infested north, sources in the west African nation told AFP.

Ghislaine Dupont, 57, and Claude Verlon, 55, were kidnapped and killed by what French officials called "terrorist groups" after interviewing a spokesman for Tuareg separatists in the flashpoint northeastern town of Kidal on Saturday.

"A few dozen people have been arrested on Malian territory over 48 hours in the course of the investigation related to the murder of the two French journalists," a source from the Kidal administration told AFP.

A member of the Malian security forces confirmed the information, putting the number of people detained at "at least 35".

News of the arrests came after the bodies of the Radio France Internationale (RFI) journalists arrived back in Paris, with Foreign Minister Laurent Fabius announcing that 150 French soldiers had been sent to join 200 troops already in Kidal.

He said however that France would stick to plans to withdraw two-thirds of the 3,000 soldiers it has in Mali by the end of January.

The Kidal government source described the arrests as an "encouraging" advance in the investigation.

"In the car abandoned not far from the crime scene, precious phone numbers were found. This is an important detail," the source said, without revealing if the numbers had been linked to suspects.

The Malian security source told AFP evidence was "accumulating" and amounted to more than just "clues".

He said investigators were being helped by prisoners jailed for the kidnapping of Frenchmen Philippe Verdon and Serge Lazarevic, ordered by Al-Qaeda in the Islamic Maghreb.

France sent troops to Mali early this year to drive out Islamists and Tuareg rebels who had seized the country's vast north after a coup.

Paris has always said the mission would be reduced by two-thirds by early next year as a 12,600-strong UN peacekeeping force takes over.

Some in Mali have voiced concern over the French drawdown amid an increase in violence, as the country's continued instability was highlighted this week with the deaths of the RFI journalists.

A French military patrol found Dupont and Verlon's bodies about 12 kilometres (seven miles) east of Kidal, just hours after they were snatched on Saturday, lying by a pick-up truck in which they had been abducted.

They had been interviewing a spokesman for the main armed separatist group in the region, the National Movement for the Liberation of Azawad.

The bodies were flown home early Tuesday from Bamako to Paris's Charles de Gaulle airport, where their coffins, draped in blue cloth, were presented to some 20 relatives and RFI employees during a private ceremony also attended by President Francois Hollande.

Journalists from RFI, a publicly funded radio station with a long history of covering Africa and similar to Britain's BBC World Service, observed a minute's silence at the station's headquarters outside Paris.

The killings have shaken France, which just days ago was celebrating the return of four hostages who had been held for three years after being abducted in Mali's neighbour Niger.

After meeting with RFI management on Monday, Malian President Ibrahim Boubacar Keita vowed the country would "do everything to find the culprits".

A French source said seven investigators, including intelligence and police officials, were sent to Mali to assist in the investigation.

The United States on Monday condemned acts of violence against journalists and expressed concern over the security situation in Mali.

UN Secretary General Ban Ki-moon was also in Mali on Tuesday for an anti-poverty mission in the region that was overshadowed by the journalists' killings.

"This drama reminds us that we must work closely to face up to terrorism and these attacks against journalists," Ban said, adding that his mission was to work with leaders of the Sahel countries "to ensure stability and prosperity" in the region.