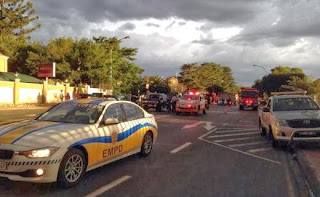 Mandy Wiener & Govan Whittles | about an hour ago
JOHANNESBURG – Eyewitness News has confirmed that the two men killed in a bomb blast at Radovan Krejcir's Money Point shop in Bedfordview last night were two of Krejcir’s closest lieutenants and enforcers.
Police say a man walked into the store on Tuesday afternoon with a bag carrying the explosive device.

The device was detonated shortly after and caused a massive explosion that blew the windows and glass doors while at least five people were still inside.

Three others were critically injured in the incident.

Smoke rises from Radovan Krejcir’s Money Point shop in Bedfordview shortly after an explosion on 12 November 2013. Picture: @mickey_gp/Twitter.
It's understood one of the men who was injured had his leg blown off.
Another has been identified as a fugitive wanted in the Czech Republic for tax fraud.
Jan Charvat known as ‘John’ is a fugitive on the run from his home country where he has been convicted for tax fraud and sentenced to five years in prison.

A second man known only as ‘Ronnie’, was also a close associate of Krejcir’s who was regularly seen with him.

He’s also named in an affidavit in an ongoing case in the Germiston Magistrates Court as having threatened a former Money Point employee with a firearm.
The three wounded men are understood to include a Serbian and a Bulgarian.

At this point it still appears Krejcir is in hiding.

He isn’t answering his phone and his lawyer hasn’t spoken to him.

Meanwhile, the police's Neville Malila said the head of Gauteng's detective unit will be leading the investigation, but not much is known at this stage.

The forensic teams are expected to wrap up their search for evidence this morning and clarity on the type of device used is expected soon.

The police's K9 unit spent most of the night searching the rubble in the store for a second explosive device, but after nothing was found, the area was declared safe.

Shortly after the blast, dozens of Bedfordview residents gathered at the scene and spoke out against what they say is a culture of gangsterism that's emerged in the community.

Independent security expert Paul O’ Sullivan said the lease on the property being hired by Krejcir expires at the end of the year and the Czech businessman should also be questioned about the explosion.

“You can’t rule out that Radovan didn’t plant the bomb himself.”

SERIES OF ATTACKS
The blast is the latest in a series of violent attacks on Krejcir and his allies.

Laganin was shot and killed at his home in Bedfordview during an apparent robbery.

The complex where a Serbian national was killed on 2 November 2013. Picture: Gia Nicolaides/EWN
He was arrested along with Krejcir last year in connection with a robbery in Pretoria.

Issa, also known as ‘Cripple Sam’ or ‘Black Sam’, was shot more than 30 times while he was stopped at a traffic light in his Audi Q7.

The Audi Q7 in which Sam Issa was shot and killed in Bedfordview on 12 October 2013. Picture: @MarkGander2/Twitter


Krejcir has been named a suspect in a number of high-profile murders, but has never been charged.

He is also fighting to avoid extradition to his home country where he has been charged in absentia on a number of charges.

In July, he narrowly survived a bizarre assassination attempt involving a Volkswagen Cross Polo fitted with several gun barrels behind its rear numberplate.

The improvised weapon, which Krejcir himself compared to something out of a James Bond movie, was remote controlled.

It was triggered as Krejcir exited his car which was then riddled with bullets.

The Cross Polo then burst into flames.

IT IS RELATIVELY OBVIOUS THAT KREJCIR IS BEHIND THESE BOMBINGS..?
DOES HE WANT TO RELOCATE TO THE CAPE AND LEAVE "NO STRINGS ATTACHED?"
HE SHOULD BE SENT BACK TO HIS COUNTRY OF BIRTH/DEATH!
THIS IS ALL STAGED PERFORMANCES.
PAUL O'SULLIVAN INVESTIGATES!
Posted by Sonny Cox at 11:39 PM