A close-up of the VW Cross-Polo with guns installed behind its number plate used in the attempted hit on Radovan Krejcir on 24 July 2013. Picture: EWN/Christa van der Walt 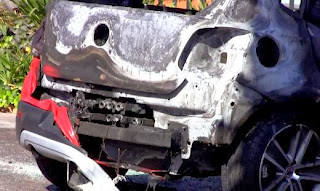 Eastgate device 'was not a bomb' 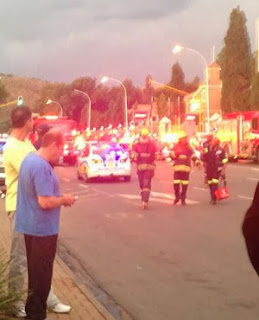 Johannesburg - Two people were killed and five others injured when a bomb exploded in Bedfordview near the Eastgate shopping mall on Tuesday afternoon, Ekurhuleni emergency services said.

Eyewitness News reported the blast was at a shop owned by businessman Radovan Krejcir, who is currently fighting his extradition to the Czech Republic where he is facing a prison sentence.

EWN added that the two people killed in the blast were Krejcir associates.

"There is a confirmed explosion. As to what caused the explosion, it is unconfirmed for now," said spokesperson William Ntladi.

"It is confirmed now two people died on scene and three are critically injured. They have been taken to Bedford Gardens Hospital, and the other two with minor injuries."

He said the explosion took place on the corner of Bradford and Nicol roads.

"What we can confirm is the intersection is totally closed to traffic for security reasons."

Metro police spokesperson Wilfred Kgasago confirmed earlier that the explosion took place at the corner of Bradford and Nicol roads.

He said metro police had no further information at this stage.

Sapa was unable to reach Krecjir on his cellphone.

Krejcir was the target in July of an apparent bid to kill him outside his Bedfordview office.

"It is alleged that he [Krejcir] arrived at the premises and parked his vehicle," police spokesperson Lungelo Dlamini said at the time.

"As he was leaving the parking spot, an explosive device was detonated from the back of a vehicle, a VW Polo, parked opposite his vehicle."

The VW Polo was stolen in Brixton, Johannesburg, in April.

Krejcir said he heard noises, like bullets being fired, from a car he parked next to.

"I managed to get away and saved my life... someone out there tried to kill me," Krejcir told Sapa at the time.

About three weeks earlier, Krejcir's Bedfordview business was broken into and jewellery worth R3m was stolen.

"It is on the same premises where an attempt to kill him was executed. On 3 July, unknown suspects broke into the premises through the roof, cut open a safe, and stole jewellery worth approximately R3m," Dlamini said at the time.

- Were you there? Send us your eyewitness accounts and photos.

SPONSORED: PRIME MERIDIAN DIRECT
Posted by Tango at 9:30 AM