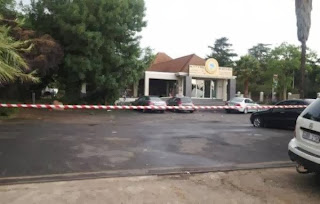 Krejcir was allegedly not at the office at the time of the blast.

A source on the scene reported that one man had his leg blown off.

Eyewitness News reported the blast was at a shop owned by businessman Radovan Krejcir, who is currently fighting his extradition to the Czech Republic where he is facing a prison sentence.

Sapa was unable to reach Krecjir on his cellphone.

Krejcir was the target in July of an apparent bid to kill him outside his Bedfordview office.

"It is alleged that he [Krejcir] arrived at the premises and parked his vehicle," police spokesman Lt-Col Lungelo Dlamini said at the time.

"As he was leaving the parking spot, an explosive device was detonated from the back of a vehicle, a VW Polo, parked opposite his vehicle."

Krejcir escaped unharmed. The blast, in the parking lot of the Money Point gold and diamond exchange's head office, on the corner of Nicol and Bradford Roads, Bedfordview, left several holes in Krejcir's car.

The VW Polo was stolen in Brixton, Johannesburg, in April.

Krejcir said he heard noises, like bullets being fired, from a car he parked next to.

"I managed to get away and saved my life... someone out there tried to kill me," Krejcir told Sapa at the time.

About three weeks earlier, Krejcir's Bedfordview business was broken into and jewellery worth R3 million was stolen.

"It is on the same premises where an attempt to kill him was executed. On July 3, unknown suspects broke into the premises through the roof, cut open a safe, and stole jewellery worth approximately R3 million," Dlamini said at the time.