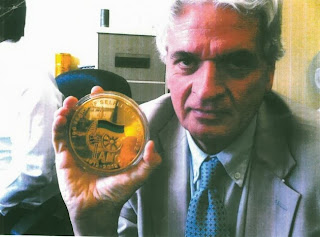 How did a con man manage a meeting with the highest office in the land? Jacques Pauw andCharl du Plessis investigate.
The man sitting next to President Jacob Zuma in the photograph is an ­international con man and fraudster.
Willi Karl Balthasar Breuer has also been an illegal immigrant in South ­Africa for the past eight years.
Despite not having a work or home address and not even holding a legal passport, the 61-year-old German businessman secured a private audience with Zuma at his Johannesburg home last September.

So many Zombies have conned Zuma in the past it comes naturally now.

The President is gullible when it comes to precious metals......

you can land a plane with a promise of a golden gift!!