Arrested Hawk may be linked to murder

Independent online (SA) 2013-11-27: BRENDAN ROANE, ANGELIQUE SERRAO and SOLLY MAPHUMULOJohannesburg - ‘Saddam” loved the high life. He drove many cars and had several addresses. He is also a serving policeman. On Tuesday, the Hawks officer was arrested by police at the Germiston Organised Crime Unit. He works in the office of a top cop who recently admitted to receiving a Radovan Krejcir-backed loan of more than R400 000. Saddam is one of two warrant officers from the Hawks who were nabbed by police on Tuesday. The Star cannot reveal their identities until they appear in court. The officers were arrested hours apart on Tuesday - a... more »
Read full articleSms this PageEmail this PageShare this story
photo: Creative Commons / Gage Skidmore 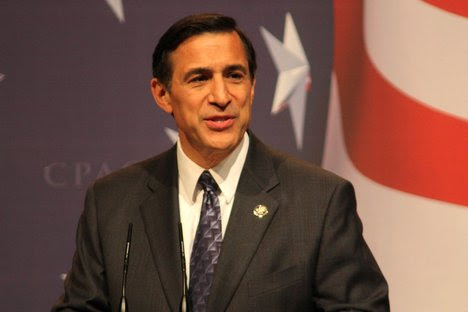 A Hawks member has been arrested in connection with the kidnapping and attempted murder charges that Czech fugitive Radovan Krejcir is facing.
The police arrested the warrant officer just after 8 on the East Rand on Tuesday morning, said SAPS spokesman Lieutenant-General Solomon Makgale.
“It is always disappointing when we have to act in this manner against our own members but we cannot just shrug our shoulders and not act against those who are alleged to have contravened the laws of this country,” he said.
At the time of publication, the officer had not been named and Makgale said more arrests could not be ruled out.
“We cannot name any suspect before he appears in court,” said Makgale.
The 41-year-old man was arrested at the Germiston Organised Crime Unit for his alleged involvement in the kidnapping and attempted murder, which is believed to have taken place in Elsburg in June.
The National Prosecuting Authority finally named Desai Lupondo as the other man who was arrested in connection with the crime last Friday.
The Star understands that the warrant officer was also investigated in connection with the murder of businessman and alleged Krejcir associate Bassam Issa last month, but Makgale would not confirm this.
Issa had been indirectly linked to Krejcir, but it was reported that Krejcir denied having any dealings with him.
There was confusion about the number of arrests on Tuesday morning, as Makgale would only confirm one arrest while some media reports quoted the Hawks spokesman Paul Ramaloko as saying there had been two arrests.
Last week, the Mail & Guardian reported that the head of the Germiston Organised Crime Unit, Colonel Francois Steyn, had received a loan of R408 000 from a Krejcir-controlled company.
Steyn admitted to receiving the loan but denied he knew that Krejcir controlled the company, Group Twee Beleggings, whose sole director is Krejcir’s wife, Katerina Krejcirova.
Meanwhile, Krejcir’s legal team said their client’s first night at a medical facility, which cannot be named, had gone well.
The team, from BDK Attorneys, won an order in the Johannesburg High Court on Monday to allow Krejcir to be taken to a hospital for treatment.
Judge Ramarumo Monama also ordered that the State pay for Krejcir’s legal costs in this application.
“It was fine, he has been admitted and he’s been treated by doctors,” said Krejcir’s attorney Ulrich Roux on Tuesday morning.
“He’s obviously in better conditions and in better health,” Roux said.
The attorney on Monday slammed the State’s request to hold the bail application behind closed doors as he said this was the first time the police had said there were security issues.
The area around the courtroom where Krejcir appeared was cleared by heavily armed police for security concerns.
“The whole scene was over the top,” said Roux.
He said the Protea Glen police station, where Krejcir was kept over the weekend, had the standard amount of police security when they consulted with him.
There had been no beefed-up security measures ahead of the court appearance, he added.
“It was like consulting with a normal client – he might as well have been arrested for drunken driving,” Roux said.
It was not known when the suspect would appear in court. Krejcir is to be held in hospital until his bail application on Monday.
brendan.roane@inl.co.za
The Star 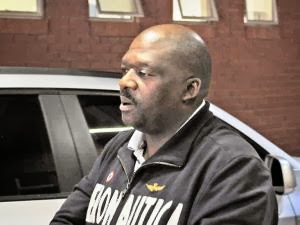 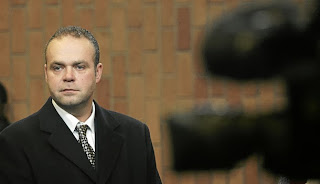 Machache George Jeff Nthoane who was allegedly involved in dodgy criminal dealings with Czech fugitive Radovan Krejcir appeared at the Palmridge Magistrate's Court. Photo: Antoine de Ras
Johannesburg - These are the two cops who have been implicated in the kidnapping and attempted murder charges that Czech businessman Radovan Krejcir is facing.
The two burly Hawks members - Warrant Officer Samuel Modise Maropeng, nicknamed Saddam, and Warrant Officer Machache George Jeff Nthoroane - were arrested hours apart on Tuesday and appeared in the Palm Ridge Magistrate’s Court on Wednesday.
Their case was postponed to Monday for a formal bail application and they will appear alongside Krejcir and another accused, Desai Lupondo.
All four have been arrested on charges of kidnapping and attempted murder dating back to an incident in Elsburg in June, but police and prosecutors are yet to reveal their possible roles in the case or details of the incident.
The pair tried to hide their faces from the media cameras when they were brought to court in a police vehicle, by covering their faces with the clothes they were wearing. But when they were escorted from the cells, they waved at photographers.
The court was not as heavily guarded as it was when Krejcir appeared on Monday. Krejcir’s appearance was held behind closed doors amid security concerns.

One of the co-accused Samuel Modise Maruping who was alledgedly involved in dodgy criminal dealings with Czech fugitive Radovan Krejcir appeared at the Palmridge Magistrates court. Picture: Antoine de Ras, 27/11/2013
INLSA
On Wednesday, the two officers were guarded by four members of the police’s Tactical Response Team armed with assault rifles.
Both Hawks officers were represented by Victor Nkhwashu, who applied for an order granting Maropeng access to medical attention while in custody, because his client had told him that both his wrists were injured.
“I saw the left wrist was swollen,” Nkhwashu told the court.
Nkhwashu also requested that Maropeng have access to his medication for hypertension and asthma.
Magistrate Joel Martini granted the order.
Maropeng, 41, and Nthoroane, 46, were arrested at the offices of the Germiston Organised Crime Unit on Tuesday.
The head of the unit, Colonel Francois Steyn, recently admitted to the Mail & Guardian that he took a loan from Groep Twee Beleggings, whose sole director is Krejcir’s wife, Katerina Krejcirova.
Steyn told the paper he had no knowledge that the company was controlled by the Czech fugitive when he took the loan in 2010.
Police have denied any link between the arrests and the report.
Meanwhile, it emerged this week that convicted drug dealer Glenn Agliotti also took a loan of R400 000 from Groep Twee.
Sars was granted a provisional sequestration order on Agliotti’s estate on Monday in the Pretoria High Court, which means he has until February 10 to respond.
brendan.roane@inl.co.za
The Star 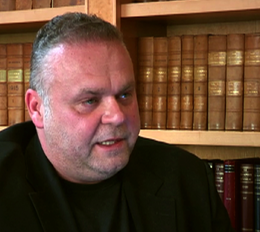 HOW LONG WILL THIS CZECH CRIMINAL FUGITIVE HAVE CONTROL OF THE HAWKS AND OTHER MEMBERS OF THE SAPS BEFORE WE SEE JUSTICE?

YES, SOUTH AFRICA IS A HAVEN FOR FLEEING TERRORISTS AND CRIMINALS!

WHEN WILL THE POLITICIANS BE IN CONTROL OF FIGHTING CRIME INSTEAD OF HARBOURING THOSE INVOLVED?